skip to main | skip to sidebar

See you there!
Posted by Unknown at Saturday, February 13, 2010 No comments:

Here’s the run down of most of the crafting that was done over the holidays in 2009.  The most work was the “Christmas Eve” coordinating outfits for the kiddos.  I used patterns from Simplicity for C’s pants and the good ole Sandbox Pants pattern from Oliver  + S for A’s, both in coordinating fabric from Joel Dewberry.  C also got a tunic (more a dress b/c I made it in a 24 month size so she can wear it for a while) – I used the  Puppet Show tunic pattern also from Oliver + S. 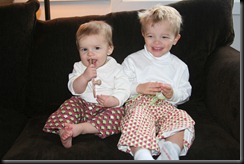 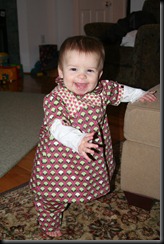 I really had fun working on these, and learned how to do some different stitches on my sewing machine…  See the decorative stitch on the pockets: 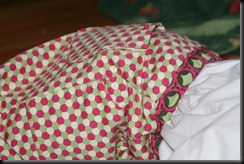 I made a Christmas Stocking for Coral as well, just like I did for her brother two years ago.  Hers turned out a bit smaller than hit (oops) and I think it looks kind of like a sock monkey stocking…  I did add some additional flowers and some leaves to the stocking, but packed it before taking a photo. 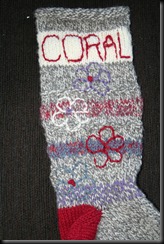 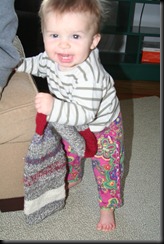 Here is a photo of one of the bed pockets I made for my sister and her girlfriend…  I used my parents’ old pillowcases which were perfect.  I followed this Sew Mama Sew pattern to make these – so clever.  I also added initials in bright red but also forgot to snap another picture before giving them! 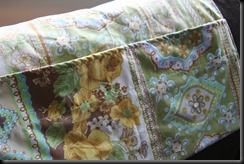 My big obsession in holiday 2009 crafting was felt.  Here are some of my creations…

mini “Triangle” cats – based on the larger variety my Aunt Jose makes.  These make good toys for kids, or Christmas ornaments.  I embroidered family members initials on the backs of these. 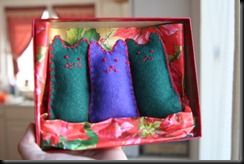 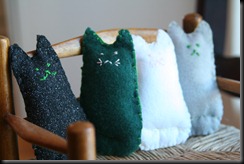 I made a customized diving ornament for a couple who enjoy diving.  I was so excited to notice their Christmas tree was covered with nautical and diving-related ornaments, but they did not have a dive flag felt ornament!!! 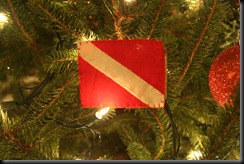 Felt food.  I made these cupcakes as well as some bacon and fried eggs (darn I forgot to photograph these).  I had so much fun making this food!  And fat free!!  The cupcakes used this pattern.  I had some silicone baking cups and these really make the cupcakes. 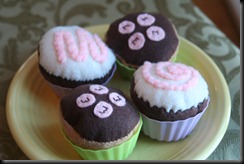 I also made my sisters Gratitude Wraps – when I saw Soulmama’s pattern I thought they would both enjoy these.  Of course, I forgot to photograph the second one, which has buffalos on it.  But here is the first one I made, complete with a pewter Danforth button (I modified the pattern slightly to use a button instead of a tie on this one). 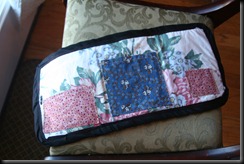 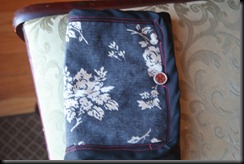 Finally, knitting, my form of therapy these days with all the moving and packing major life changing that has been happening.  The sweater (which won’t fit in the bust until I stop nursing) is the Shalom Cardigan from Involving the Senses. I knit this pretty much entirely on my Thanksgiving road trip from CT to New Jersey and Pennsylvania.  It is a striking pattern and it is fun to knit, and quick.  I used Cascade Ecological Wool. 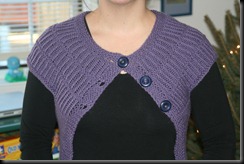 And this little pile was cast on before we left New England on our cross country road trip to Arizona.  I am about 50 percent done with this one.  It’s the February Lady sweater.  Love the Elizabeth Zimmerman style of knitting, and this version of the baby sweater by Flint Knits is awesome.  Fun to knit.  And the yarn I’m using feels great, too.  Araucania kettle-dyed wool in a grey blue. I may have to make this a mother/daughter sweater and make the baby version next!

I made my first fabric book for my niece Megan’s second birthday.  For my first try, I am very pleased!  I have all sorts of ideas for ways to make these going forward.  If only I had more time…  :)

This book has a seasonal theme, and has room for pictures of Megan in the different seasons.  I tried to include ‘activities’ like zippers, pockets, and buttons.  My mom made me some books like this when I was a child, such fun!

Take a peek inside! Spring:  bunny behind the flowers! 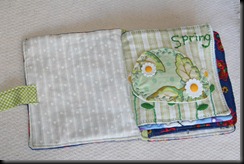 Summer:  butterfly comes out of pocket 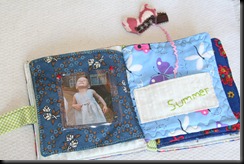 Fall: leaf behind the zipper 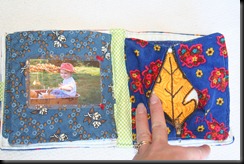 Winter:  snowman has a scarf to tie 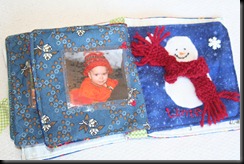 knitting and sewing the days

I swear knitting lowers my blood pressure, which is something I've been needing to do a little these days, as our family weathers some difficult times. I've had several small knitting 'kits' ready for me to take in the car or keep ready during naptimes, and I have finally made my Fetching mits. They are so great when pushing the stroller on walks on these cool days! I did not have enough yarn to finish them all in one color, but I like the combo of light pink and white. I had some Debbie Bliss Merino Aran, which is just slightly less yardage than the Cashmerino Aran, so that explains the addition of the white.

Another kit - kitchen scrubbies with leftover yarn. I'm always trying to improve my crochet skills, and these are a great way to do so! Ethan has been testing out this one and so far says he really likes it. I made three flowers and sewed them together through the middle. This is Lily Sugar and Cream cotton yarn.

A hat for baby girl... a Yankee knitter pattern for an earflap hat. I used some Plymouth baby alpaca yarn I got this spring at WEBS shortly after Coco was born. Love the colorway. The accent color on the trim has little gold sparkles in it, too, very lovely.

And some pants to grow in... these are a Simplicity pattern that I made in the 18 month size and then hemmed them up super high so I could just let the hem down as she grows. The fabric is some Joel Dewberry that I found on super sale at Hancocks of Paducah, I bought some contrasting patterned fabric in the same color combination and will be making a little top to go with the pants for a Christmas outfit, and I think I'll try to make some pants for AJ and maybe a bowtie?!?

Flowers on the backside to tell which way they go on!

Here are the first pair of Sandbox pants for AJ - another pair is in the making, these are great. I made them big so I just cuffed them up. May make the next pair a little shorter.

And here is the second swingset tunic for Coco in some Heather Bailey fabric I picked out while pregnant with her. I think this will look great next summer! It is an 18 month size and fits like a dress now.

Getting the hang of things here

I have been adjusting to life as a full time caretaker for my kids, and I was worried for a while that I'd never knit, sew or paint again, even though I have 'studio' space in the finished basement at our new place. Fortunately, I am getting the hang of life with a baby and toddler at home. I am always stunned when I manage to cut out some fabric or sew something. And I have knit a hat since being here (it's been a little over two months). Things are looking up!

Swingset tunic in vintage thrifted fabric, the 6-12 size (Coco is about 4 months here, and it is almost too small already!):

Lazy Days skirt in Heather Bailey Freshcut fabric, for when Miss Coco is a tad bigger!:

Hat for Emmaline (modelled by Miss Coco) in Cascade Eco wool with some crocheted Noro yarn for the flower (this is my own simple design):

And some arts and crafts! Fun with toilet paper rolls!!

I haven't had any time! I have a new baby, an upcoming move, graduations, birthdays and anniversary parties, as well as transitioning from working full time to being home full time, ee gads. But here are some of the 'products' of the past several months...

Mommy putting her new baby in handmade stuff while still at the hospital!
Vine Lace Baby Hat by Sandi Wisehart in some leftover mulberry silk
Saartje's booties by Saartje de Bruijn in some leftover cashmere blend 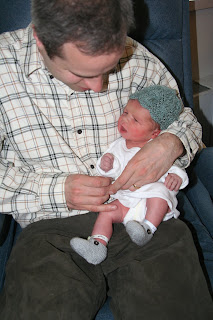 Baby at home, in the fantastic Kicking Bag for Babies by annika with various leftover sock and lace weight yarns - very funky and by far the most used and useful handmade item during the first few cold weeks! (also note the handsome, haggard husband and the disheveled craft wardrobe, and the hideous wallpaper in our rented house). 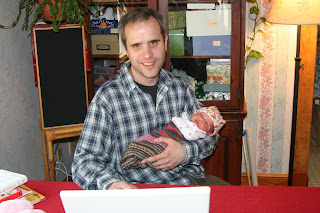 Some triumphant sewing, something I haven't done in a while. this gives me hope for finding time to sew amidst little kiddos everywhere. This is the Buttercup Bag from Made by Rae. I love this pattern, very well written and a lovely purse. I made this for my sister's birthday, with some decorator fabric I found at a tag sale. 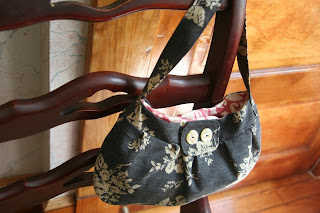 Here, a happy 2 month old in handmade gifts from friends... the onesie from a local friend, and the cardigan from Jeanne... and that smile is one of the best products of the past two months!!!

I have finished a lovely sweater from Kim Hargreaves Heartfelt. It's Storm.

It is a little different than the pattern calls for -- I finished it inside out. I did this unintentionally, but I really like the way it looks. It doesn't look too bad on a big pregnant belly. I'm hoping this will be a nice spring wool to wear after the baby arrives. Note the buttons-- vintage glass cutouts given to me by my mother in law, from her collection.

This is a Flickr badge showing public photos from stellesky tagged with ajp. Make your own badge here.